Consulting firms – and only consulting firms – care about a hypothesis. They would like you to state a hypothesis within the first few minutes of the case, usually after you walk them through your structure. I know that it seems crazy to give them an answer to the case before you have any information. But the reason consulting firms like it is that when they go into a company they often don’t know what the problem is, so they state an initial hypothesis and try to prove it. Chances are they are going to disprove the first five, but it narrows the scope of the problem. For example, if you get a profit and loss case, you might say, “My hypothesis is (or my thoughts are) that profits have fallen because costs have risen.” That is something you can try to prove as you move through the case. If you disprove it, you’ll want to update your hypothesis as you proceed through the case.

The advantages to stating a hypothesis up front are that it will help you ask the right questions, make your analysis more linear, and force you to focus on issues that you can either prove or disprove. It also helps you identify which structure to use, thus defining the starting point.

I’ve known plenty of candidates who received job offers without ever stating a hypothesis. Think of it as icing on the cake. If you can remember to state one, they’ll love it. If you forget, though, it’s not the end of the world. But because the interviews are so competitive you’ll want to take every advantage. When you are doing practice cases, a simple trick to remind yourself to state a hypothesis is to lightly write the letter H in the middle of your first page of notes. That way, as you are writing out your structure, you’ll see the H and be reminded to offer a hypothesis. You will get into the habit and it will come naturally to you in an interview.

In real life, consultants can take up to two days to form a hypothesis, but you have about five minutes. So, don’t worry if your hypothesis is wrong. It eliminates one possibility and allows you to restate your hypothesis and focus on another aspect of the case. Think of the process as one of elimination.

Read more about preparing for case interviews in 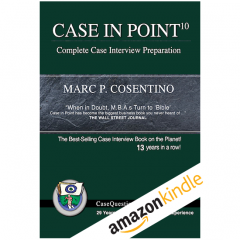 Marc, the world’s foremost authority on case interviewing has twenty seven years of experience with case questions. He has written well over a hundred cases, while coaching, preparing and training more than a hundred and fifty thousand students and alumni. He has written three books involving cases and consulting. Cosentino has given workshops to students at colleges and MBA programs for the last twenty seven years and has held training sessions for career services professionals on how to give cases and how to analyze a student’s performance.
7ads6x98y